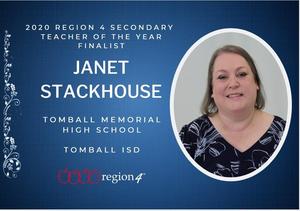 Stackhouse was one of just five secondary teachers in all of Region 4 named a finalist and will be up for the 2020 Region 4 Teacher of the Year honor when it is announced in August.

Stackhouse is a veteran teacher that has spent her entire 26-year career with Tomball ISD.

She began her time in Tomball ISD at Tomball High School in 1993 and was a part of THS for 18 years. She made the move to Tomball Memorial High School when it opened in 2011.

When asked ‘why do you choose to stay in Tomball ISD?’, her response was simple.

“TISD is home!  I am fully committed to this district. The highest possible education of all students has always been and always will be the central focus of this district.  Everyone is truly willing to do whatever it takes and it is evident every day.”

Stackhouse was named Tomball ISD’s Secondary Teacher of the Year following the 2018-2019 school year and represents the district as a Region 4 finalist.

Regional selections for Teacher of the Year are due to TASA by August 1, 2019.